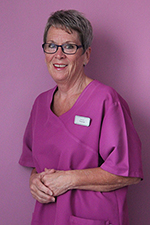 Yvonne qualified as a general nurse in Coventry in 1978. After working on a general medical ward for two years she moved to Frimley in Surrey to train as a midwife. Yvonne practiced as a midwife for 13years including 8 years in the army as a commissioned officer in the QA’s where she served both in Germany and Hong Kong.

On leaving the Army in 1994 Yvonne returned to general nursing and worked in care of the elderly being first the deputy manager and then the manager of a care home which was registered with CQC.

Yvonne relocated to The Costa Blanca in December 2015 when an opportunity arose at the family medical centre for a general nurse and co-director.

She has fulfilled the requirements of the Ministry of Education and Science in Madrid and is registered with the Colegio de Enfermeria in Alicante.

Yvonne lives in Albir with her sister Jane and Westie Ellie. Jane is also a co-director of the clinic.